Fox Farm Brewery resides on a thirty-acre parcel of farmland in Salem, Connecticut. A beautifully restored 1960s dairy barn serves as the epicenter for the brewery and houses a two-story tasting room equipped with a mezzanine. Zack Adams and his wife, Laura, bought the home just a few hundred yards behind the barn with dreams of one day building a brewery with a sense of place. After years of planning and with the help of family and friends, Fox Farm is now a reality.

Although best known at the moment for their hoppy IPAs and pale ales, it is their emphasis on sourcing local ingredients and taking a culinary approach to recipe development that translates into a truly unique experience, setting them apart from being labeled as just another brewery.

“With IPAs and hoppy beers, the secrets are out. People are making those beers all over the world. The farmhouse beers are something that we think are truly unique, [something] that we can bring to the table,” says Zack Adams.

These beers are fermented with their house yeast culture that takes a lot of the control out of the hands of Adams and his brewing team. In a craft where repeatability and precision are highly lauded, Adams enjoys the experimentation that comes with farmhouse and barrel-aged beers.

Sourcing local ingredients and foraging the property, which is home to heather, tart cherry, and Myrica gale (or bog-myrtle, an ingredient mostly found in gruits) are points of emphasis for Adams and his team when sculpting new recipes. Laura’s family owns a vineyard (mostly St. Croix grapes) just down the road, and it also serves as a color palette of sorts when crafting new beers. The tradition of home winemaking in Laura’s family plays a big role at Fox Farm.

“Tradition has always been important in our family, whether it’s food, wine, or beer. There’s something special about passing down these moments from generation to generation, and it creates a sense of connection to where you’ve come from. Just as I can remember back to the winemaking in my parents’ basement, our kids will remember picking and crushing the grapes,” says Laura Adams.

Those grapes can be found in several Fox Farm beers, such as Near & Far, a double IPA that features 1,000 pounds of Frontenac and Muscat grapes paired with Nelson Sauvin and Motueka hops from New Zealand. Pantry Party, a collaboration with fellow Connecticut farm brewery, Kent Falls Brewing Co., used more than 200 pounds of St. Croix grapes for a pleasingly tart farmhouse ale; and most recently, Annata, a grape-harvest ale inspired by the Italian grape ale, was brewed in mid-September of last year, shortly after the annual harvest.

Annata is born out of a mixed-culture fermentation in stainless steel, then dosed with almost 800 pounds of those very same St. Croix grapes several months later, introducing a new wave of fermentation and complexity. When working with St. Croix, Zack Adams admits most brewers blend the grape with others due to its highly acidic nature, but he enjoys the upfront punch of such a compelling ingredient. “It’s nice to layer in that acidity to complement whatever was already going on in the beginning of fermentation,” he says.

Annata was a featured beer at this year’s WoodsCRAK 18, a festival hosted by CRAK Brewery in Italy. The fest featured two other United States breweries—Other Half Brewing Co. (Brooklyn, New York) and Jester King Brewery (Austin, Texas)—along with an assortment of breweries from around the globe that descended on Padua, Italy, for a two-day festival in the woods.

For Zack, being able to visit a place that is becoming known for Italian grape ale, a style the BJCP placed in the appendix of their 2015 revised style guidelines, and pouring Annata, which stems from this beer/wine-inspired crossover, was a truly incredible experience. The exposure is something he can hang his hat on, but getting the opportunity to understand where this beer comes from was immensely valuable for him and his team. 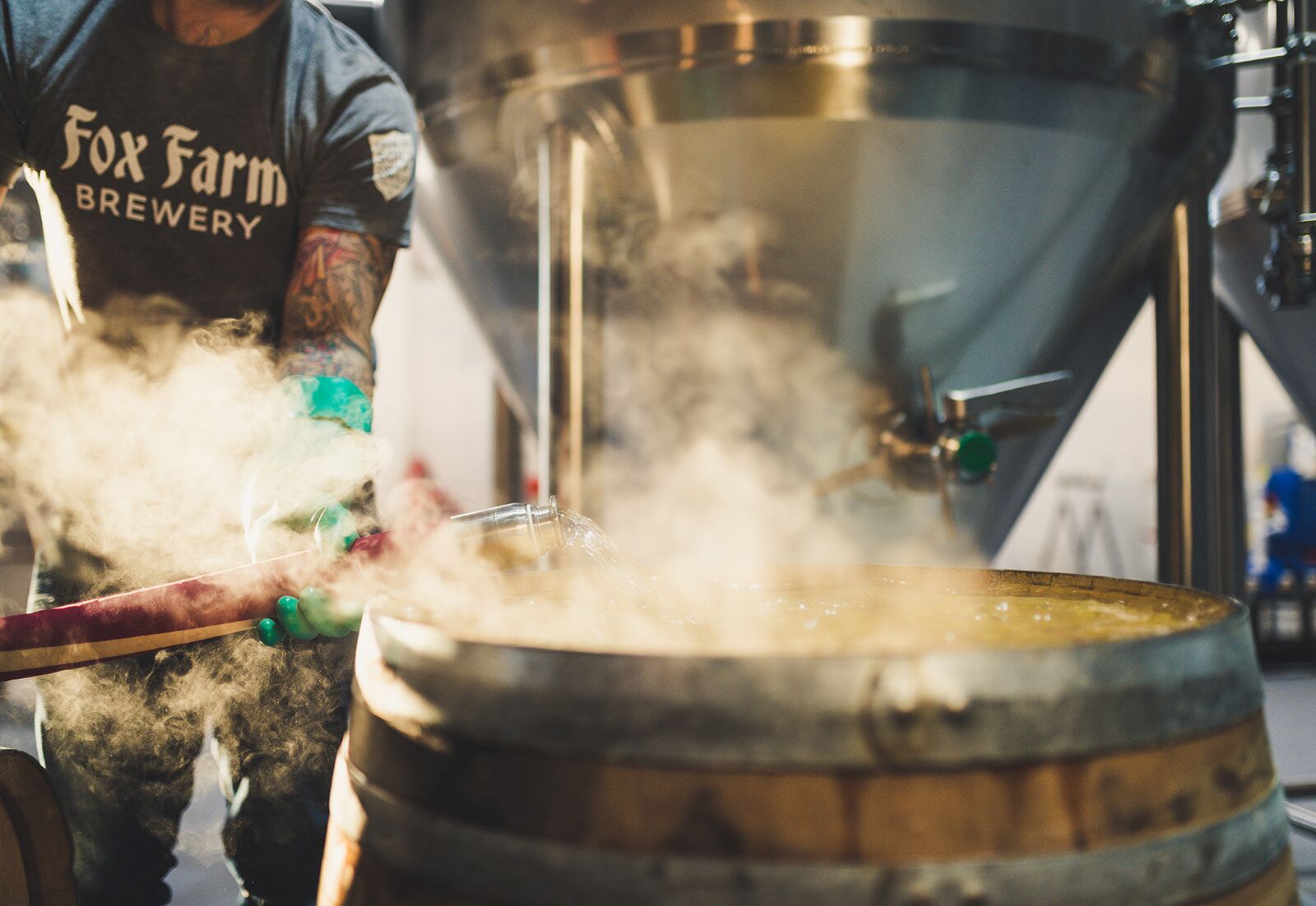 Hospitality: A Key to Success

Zack Adams’s brother Dave is the general manager and a prominent presence in the tasting room. Hospitality has been a monumental part of Fox Farm’s early success, which is due in large part to Dave and the tasting-room staff.

“We try to focus on the beer and the service we provide to the people that we’re standing in front of. We try to give them the best experience possible,” he says.
As part of an effort to keep the farmland location warm and inviting, the tasting room hours are trimmed toward the lighter side (2 p.m.–7 p.m. on Friday; 11 a.m.–5 p.m. on weekends), and there is a sample limit during your visit. Guests can choose between four 7-ounce pours or two 13-ounce pours in an effort to keep things tame out of the respect for their neighbors and the sanity of Zack and Laura, who, as mentioned above, live a mere 200 yards away.

“Breweries mean a lot of different things to different people, and we just want to guide people toward treating this as a place to enjoy a beer or two. We’re a factory, and the tasting room is this wonderful retail component that we have, but we’re not trying to be a bar. We’ve been really fortunate where it’s fallen into this wonderful groove that we’ve been able to maintain by just being ourselves and running this place the way we want to. We haven’t had to go to excessive lengths to bring people here,” says Dave Adams.

Tranquility can be found in grabbing a half pour of Gather, their Keller Pilsner, and sitting on the second-floor mezzanine that overlooks the brewhouse and designated coolship room. There is outdoor seating and enough shade to throw a picnic blanket under if need be. The atmosphere that has been created at Fox Farm is hypnotic, just as much as it is vibrant.

“We’ve done everything we can to manage this in a responsible way. We try not to drum up excessive hype. We have a good vibe here, and we seek to protect that,” says Zack Adams.

On top of the traditional styles found at Fox Farm, experimentation and collaboration all come together in a beer like Żyto, a Kvass-inspired farmhouse ale featuring the use of 200 pounds of rye bread from Farm to Hearth Bakery (Haddam, Connecticut) in the mash, along with Connecticut-grown barley, rye, and triticale.

First Furrow, a foeder-fermented Czech Pilsner brewed in collaboration with Counter Weight Brewing Company (Hamden, Connecticut) is a feather in the cap. Rounding things out is Fox Farm’s first barrel-aged sour beer, Avalonia. Named after the Paleozoic microcontinent responsible for the geographic similarities shared between New England and Northern Europe, Avalonia is a white wine barrel–aged mixed-culture beer that was released in June of this year.

But if one offering exhibits Fox Farm’s ethos on locally sourced ingredients, it would be their upcoming Norwegian-inspired farmhouse ale. Yet to be named, the beer features Myrica gale from the property; spruce tips from The Tiny Acre farm (Woodstock, Connecticut); barley and wheat from Thrall Family Malt (Windsor, Connecticut); hops from Fox Hollow Hops (Colchester, Connecticut); and it’s fermented with Kveik, a Norwegian farmhouse yeast.

Every bit of this beer could be found within a fifty-mile radius. It will spend several months in stainless, be transferred to oak, and then be bottled for natural carbonation and maturation.

When asked what the brewery will be like in five years, Zack and Dave both agree on one thing in particular: doing a lot of the same things, just better.